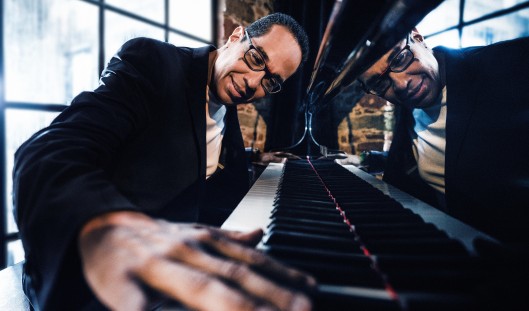 Crisálida, the new recording by Panamanian pianist and composer Danilo Pérez, is among his most ambitious projects. It addresses broad, complex, and emotional social issues utilizing various musical tools and strategies and interdisciplinary work while referencing an assortment of musical traditions interpreted by an unusual ensemble.

It is not an easy listen — and perhaps it shouldn’t be.

“Crisálida, to me, means a protected space of human development. To continue confronting these crises humanity is facing, like immigration issues and climate change, we must reverse path, reimagining a new society,” told me Pérez in a phone conversation in February from his home in the Boston area. “I am betting on music, on the arts, as a way to unite us and humanize us.”

The recording — the title of which translates to “chrysalis” — features two four-part suites, “La Muralla (Glass Walls) Suite” and “Fronteras (Borders) Suite.” Leading his Global Messengers, a multicultural ensemble comprising Berklee College of Music’s Global Jazz Institute alumni, Pérez sets up detailed musical narratives. “Al Musifir Blues,” from the “Fronteras Suite,” is based on a dream Pérez had, he says, “about this young man coming to study at Harvard but stopped at the border because he was from Palestine.” “Adrift,” a piece from the same suite, is “about the story of a Mexican mother that gives her child away to give her a better life. After 20 years, she has the urge to see her again, but now her daughter is North American.”

“Muropatía,” which can be roughly translated as “Wallpathy,” mockingly bounces along before exploding with a furiously paced spoken-word passage. The title is a “made-up disease: ‘Muropatía,'” he says, breaking into laughter before continuing with mock frustration. “But it’s that, man! When human beings don’t know something, the first reaction is making a wall.” However, he concedes that his notion of “no walls” was severely tested by the COVID pandemic. “I thought, ‘Perhaps we do need walls’,” he says. “But we need glass walls. We need to see each other, feel the light going through.”

The music on Crisálida often has a distinct Middle Eastern sound. But Pérez and the ensemble also draw from sources as disparate as folk music from Latin America, blues, Afro-Cuban music and even what sounds like a passing node to Erik Satie. The Global Messengers can now suggest a chamber group, now a traditional folk music band, and their performance blurs standard notions about what is written and improvised.

“That was intentional,” said Pérez. “I didn’t need to set up improvised solos and chord changes. And as we talked about the need to create a new language, [the musicians in the Messengers] also started to think differently. In this project, the music is the result of the work of the ensemble.”

Pérez set up jams for more than a year and, by trial and error, found where the players felt most comfortable rhythmically and where they would take the music if left to their own devices.

“Out of that experience, I started to write music, bring it, see what they would do with it, rewrite it, bring it back. This music is still being rewritten,” he noted emphatically. “This music is exactly what a crisálida should be: a platform for open conversation. [The players] would ask me, ‘Why do we feel so comfortable?’ Because we are creating language together, many of the ideas I’m bringing back are from that common language. That’s what it is.”

Some of the concepts, creative strategies, and fearlessness that Pérez has brought to bear on Crisálida carry the imprint of two artists who have had a profound musical and personal impact on his development: Dizzy Gillespie, who in 1989 called on the then little-known pianist to anchor his United Nation Orchestra; and Wayne Shorter, with whom Pérez has collaborated, as a member of his quartet, since 2010.

“Dizzy was the one who introduced me to the idea of cultural diplomacy,” he said. “My first big experience with that was with the United Nation band, and he taught me a lot about how music was to be used to unite people in the world.”

That notion has been reflected over the years in Pérez’s music and his activism. He has served as Goodwill Ambassador to UNICEF and currently serves as UNESCO Artist for Peace Cultural Ambassador to the Republic of Panama. He is also the Founder and Artistic Director of the Panama Jazz Festival, which will celebrate its 20th edition next year, and the Berklee College of Music’s Global Jazz Institute.

Pérez says that he and his wife, Patricia Zárate, saxophonist and executive director of the festival, “see education as a form of activism,” he noted. “We believe that in education is where we can make a difference and have an impact.”

Working at the Global Jazz Institute has been equally crucial for Pérez. “That’s where I met my new band members,” he continued. “They are alumni of the program. They were coming from very traditional folkloric music in their countries, but they were at the Global looking for new ways to interconnect, to find new ways to explore music as an intercultural dialog.”

Shorter’s influence is present throughout Crisálida, from the soundtrack-of-a-movie-of-the-mind quality of some pieces to certain strategies to develop the music. (Coincidentally, Shorter and Pérez were both individually recognized with the 2021 Doris Duke Artist Award “for their ongoing innovation and impact in the field of jazz.”)

“One aspect where my experience with Wayne came into play is the idea of taking a motif and creating a whole musical event out of it,” the pianist explains. Out of that, The Global Messengers created “some amazing stories,” he recalled. “And we did that with Wayne a lot: letting something grow out of one note, out of a little phrase. And I wanted that feeling in the music, that you’re hearing a story, growing from that one note — and you don’t know where it’s going. That was another part of the process. We don’t know where we are going, so I wanted the music to feel that way.”

“At one point, we were talking, and he made it all very clear for me,” the pianist says. “He said, ‘Danilo, write and play music the way you want the world to be.’ And that’s what I did. I’m hoping we’re going in that direction with Crisálida.”