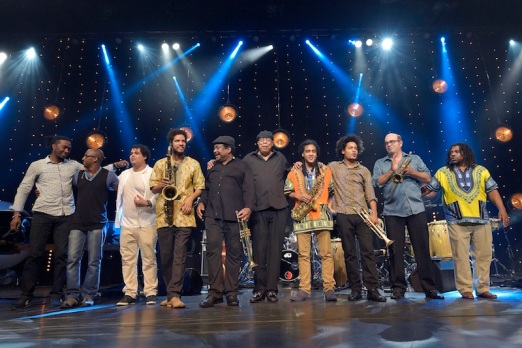 Chucho Valdés, center, with the band of Irakere 40 at Marciac, France

This story was first posted in Artburst Miami, November, 2015

For the past 50 years, Cuban pianist and composer Chucho Valdés, 74, has been a transcendent figure in Cuban music. But despite of his virtuosity as an instrumentalist and the brilliance of his writing, many consider the founder and leader of Irakere, the exceptional Afro-Cuban jazz fusion group that became a landmark in Latin jazz, his masterwork.

Valdés and a 10-piece band comprising his new group, the quintet The Afro Cuban Messengers, augmented by three trumpets and two saxophones, will offer “Irakere 40,” a tribute to Irakere at the Fillmore Miami Beach on Saturday, November 14, at 8 p.m.

“It’s not an Irakere concert,” said Valdés in an interview during a brief visit in Miami a few weeks ago. “This is my group, featuring several generations of Cuban musicians, celebrating Irakere’s concept — today.”