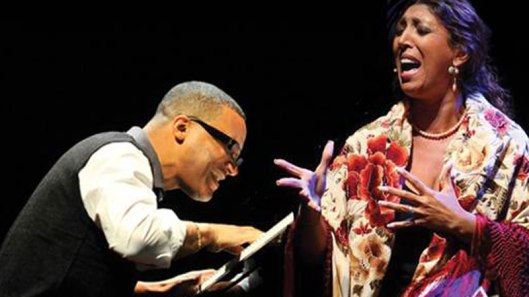 This story was posted on Artburst Miami in March, 2016

The collaboration between Cuban jazz pianist Gonzalo Rubalcaba and Spanish flamenco singer Esperanza Fernández brings together two artists who, while superb in their own traditions, have never been afraid to step out of them, take risks and explore.

Son of Guillermo Rubalcaba and grandson of Jacobo Rubalcaba, both illustrious musicians, Gonzalo grew up in the tradition before setting his own path in jazz, including jazz-rock fusion, Afro-Cuban jazz and post-bop, but also excelling while exploring classical music, danzones and Mexican boleros. Fernández, a gypsy from Triana, the quintessential flamenco neighborhood of Seville, was, like Rubalcaba, born and raised in the tradition, in her case, flamenco. She has appeared with flamenco royalty such as Paco De Lucia, Camarón de la Isla and Enrique Morente, but has also explored collaborations with classical orchestras (performing and recording Falla´s “El Amor Brujo,” for example), jazz ensembles and flamenco innovators such as guitarists Niño Josele and Gerardo Nuñez and saxophonist Perico Sambeat.

In “Oh, Vida!,” a show at the Arsht Center on Friday, March 4, part of Flamenco Festival Miami and commissioned by the Arsht for its 10th anniversary, Rubalcaba and Fernández will be exploring the styles and repertoires of two singers who became iconic figures in their respective genres: Beny Moré in Afro-Cuban music and Manolo Caracol in flamenco.

In an recent interview, Rubalcaba spoke about working with Fernández, the challenges of cross-cultural projects and the secrets for finding a good musical meeting place.

How did this project came about?

I met Esperanza in the Playing Lecuona project. The idea was that Chucho Valdes, Michel Camilo and me would be responsible for addressing Lecuona’s repertoire in different formats and with singers, in duets. I didn’t know Esperanza. But when we met for the recording we found out we felt very comfortable with each other and came to admire each other. So a few months later, Esperanza approached me with the idea of doing a project in which we could combine our different visions about music. I thought it was a great idea.

What were the biggest challenges in this project?

I believe that for any artist delving into a genre that is not his own, the greatest challenge is not having the life experiences, the context of the culture that produced that music. I have great respect for flamenco, but I am not and I will ever be a gypsy or a flamenco, so ours was an exercise in finding the meeting points, the connections. Otherwise, it’s just like learning any language, you have to listen.

What does this type of project, across genres, across cultures, means to you?

For many reasons, Cuba has a cultural identity that is very open, very flexible, when it comes to mixing with other cultures. We Cubans have always been very open to deal with whatever comes our way that we think can contribute to our culture. Ours is not a fixed, stationary culture. Besides, all these kind of projects are useful beyond whatever the final product might be. It’s a continuing learning process that helps you to keep growing.

“Oh, Vida!” Features the music of Beny Moré and Manolo Caracol. How did you arrive to those choices?

Beny Moré is, without a doubt, a key figure in Cuban music, and then we thought about what was happening in flamenco at the time Beny was at the top, who would have been his counterpart in flamenco, and the name Manolo Caracol came up. And then we went about picking the repertoire. Of course, we included some classics, but not all. We also picked some obscure songs that we liked.

Something that has made me very happy [in this project] is that Esperanza has the same attitude about rediscovering Beny and Cuban music that I have about her culture. In any collaboration like this, you have to start from a place of respect, and that respect is manifested in the research, the reading, the listening and the need to go deep and find the essence of the music.