Fado is a music of hard earned wisdom and longing, a cry against the fates. It would seem to be a grown person’s art —only that it’s not necessarily so. After the passing in 1999 of Amalia Rodrigues, the most important singer in fado’s history, a generation of young fadistas came into view, re-energizing the genre. Ana Moura, 36, is one of its leading figures. She debuted on record in 2003 with Guarda-me a vida na mão (Keep My Life in Your Hand). The centerpiece of the album, “Sou do Fado, Sou Fadista,” — a song  by Jorge Fernando, eminent fadista and songwriter, one-time accompanist of Rodrigues, producer of the album and a regular collaborator with Moura — was her proclamation: “I belong to fado, I am a fadista.” Moura once told an interviewer she knew she would be a fadista by age seven.

Moura has a strong, smoky, dark-hued voice and a finely controlled phrasing. Working within the well-defined range of fado, she has mastered the subtle stressing of a word or the use of hesitation in a line that can add meaning to a lyric or heighten the drama. As she continued to grow as a performer, she seemed to stay close to Rodrigues’s sound while also probing the edges of fado.

Perhaps inevitably, soon tradition met rock and pop. Mick Jagger and Keith Richards heard her at a club in Lisbon in 2007, while on a stop on their tour, and her performance earned her an invitation to perform live with The Rolling Stones. Soon after, she joined the band in a memorable reading of “No Expectations.” Moura ended up recording the song, along with a version of “Brown Sugar,” with Stones saxophonist Tim Ries in Stones World, a recording of World Music versions of Rolling Stones songs. She also added those songs to her own repertoire. Then Prince became a fan. And in 2010, she was invited by Prince to appear with him at a rock festival in Lisbon. He accompanied her on a couple of fados. While reluctant to talk about specifics, Moura has said since that she later joined Prince on some songs at his studio in Minneapolis. “An experiment,” she called it.

“What this means for me is the high regard that musicians from completely different [genres] have for our fado,” said Moura when asked about these experiences by the Brazilian digital publication Saraiva Conteudo. “And in my career, it has translated in the influences that brought [to my music] and in making that an audience not very concerned with fado now knows me and follows me a bit closer.”

Cause or effect, it led Moura to Desfado (2012), which as the title slyly suggests it’s her first full go-round in a sort of de-construction of fado. Recorded in the United States with musicians who were not necessarily familiar with the fado tradition (such as pianist Herbie Hancock) , it even included a version of Joni Mitchell’s  “A Case of You.” It became a monster hit in Portugal. Having earned five platinum records (about 100,000 copies), Desfado is the all-time best-charting album in Portugal. In her most recent recording Moura (2015), her sixth, she salutes the tradition as she revisits two traditional melodies with new poems (a time-honored practice in fado), but she also presses forward with more stylistic innovations, including drawing from other music genres and featuring songs in English.

“I didn’t want to do a Desfado II,” she said in a recent interview with the Portuguese press. “I wanted to do something different again. I feel the need to surprise, take risks. To always do the same thing creates me anxiety; to do things that are always different is what gives me strength. That’s what works with me.” 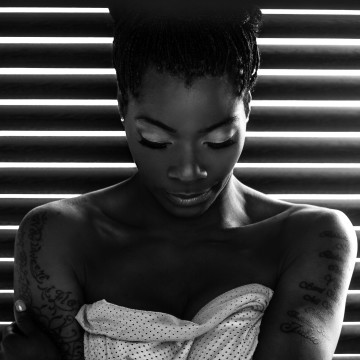 Her emotions in open view, like the texts etched on her skin; singer, songwriter, producer, poet, photographer Buika seems fearless — and breathtakingly so — on and off stage.

She laughs at the notion. “Well, I have to admit that I’ve been always a bit of an enfant terrible,” she says, almost coquettishly, whispering in Spanish. Then the tone hardens subtly. “When you start out by being a cero a la izquierda (literally, zero to the left, an expression in Spanish meaning worthless) you have nothing to lose, so you live with less fears.”

“When you start out by constantly hearing ‘This girl is good for nothing,’ ‘She can’t win at anything,’ ‘She’s a mess,’ then every little thing you achieve is a great success.”

Kicked out of a singing class at church as a child (“Someone is singing like a dog,” she once recalled the teacher saying), Buika has one of the most distinctive and expressive voices in popular music, textured and sensual, strong even while suggesting utter vulnerability. It is also a remarkably malleable instrument, as forceful belting an R&B song as it is seductive and nuanced interpreting a bolero.

Born Maria Concepción Balboa Buika in the Spanish island of Palma de Mallorca, she grew up in a Chinese neighborhood, “among junkies and prostitutes,” but found a home away from home among the gypsy community. It was also her introduction to flamenco and copla, a song style that, over the years, has become both a point of reference and port of refuge between bold excursions into soul, jazz, hip hop, rancheras, boleros and more. Now and again she has revisited copla standards such as “Ojos Verdes,” and “La Niña de Fuego,” which gave title to one of her albums. But her most recent recording, Vivir Sin Miedo  (Living Without Fear), for which she wrote nine of the 10 songs, includes nods to reggae, R&B, Afrobeat and gospel. More than half of the material is in English.

“Give me everything,” she said. “Give me copla, give me jazz, give me flamenco, give me bolero, give me the blues. At the end, each one of them will prove small because, at the end, every style carry its own limits — and I’m a free [musical] note and don’t have limits. Those styles are wonderful, but they are just worlds in a vast, vast universe.”

“It’s not that I’m fearless,” she said. “I do have fears and will always be there, but I don’t allow them to determine my life. I prefer to play with them rather than accept being their victim.”