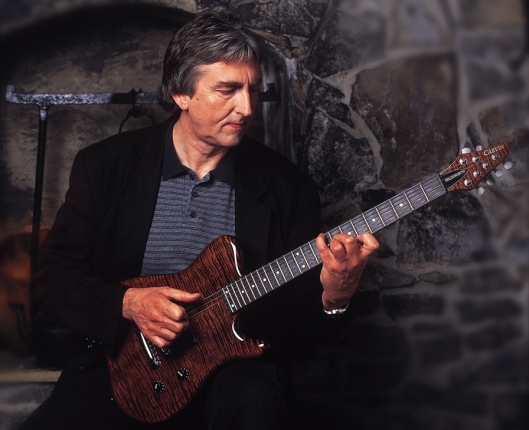 British guitarist and composer Allan Holdsworth, influential in both, progressive rock and jazz, died Sunday, according to a Facebook post by his daughter Louise. No cause of death was announced. He was 70.

Holdsworth is perhaps best know as a member of progressive rock groups such as Soft Machine, Gong and UK, a supergroup of sorts also featuring former King Crimson members drummer Bill Bruford, keyboardist and violinist Eddie Jobson, and bassist John Wetton, but his remarkable solo career includes more than a dozen albums under his own name. While he never quite achieved a broad popular acclaim, his influence among guitarists was wide and substantial. For many of them, the title of a Guitar Player Magazine cover story on Holdsworth in 2008 said it all, he was “The Man Who Changed Guitar Forever.”

He possessed a highly original and sophisticated harmonic and melodic approach and an astonishing technique. He was an early, and persistent, champion of the SynthAxe, a guitar-like MIDI controller invented in the early 80s and no longer available. (Check his 1986 recording Atavachron). Whether playing the SynthAxe or a conventional electric guitar, Holdsworth favored very distinct, liquid, horn-like single note lines that often seemed to defy not just convention but gravity.
It was his very own “sheets of sound” approach and it evoked intriguing comparisons.
“I think Allan Holdsworth is the John Coltrane of the guitar,” guitarist Robben Ford is quoted on Holdsworth Wikipedia page. “I don’t think anyone can do as much with the guitar as Allan Holdsworth can.”