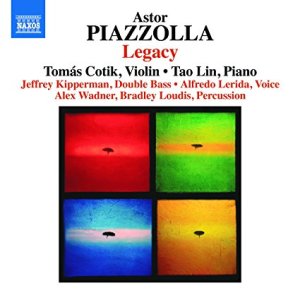 Tomás and I had collaborated on a couple of Piazzolla-related projects during his time in Miami, so when he told me about Legacy, I jumped at the opportunity to write the liner notes. Piazzolla´s story and Tomás playing are tales worth telling.
I hope the notes intrigue you into checking this recording. You will not be disappointed.

Tango is the music of Buenos Aires — but the man who would challenge so many of its traditions and clichés, and in doing so would bring it kicking and screaming into a new world, was not even a porteño, as the inhabitants of Buenos Aires are called. Astor Piazzolla was born in Mar del Plata, a resort town on the Atlantic coast of Argentina, about 250 miles south of Buenos Aires. When he was just 4, his family moved to New York’s Lower East Side, then to a tough neighborhood populated by gangsters of seemingly every denomination. He was short and walked with limp because of a birth defect, so he fought his way to respect. The other kids called him “Lefty,” acknowledging his punch.

He grew up listening to Italian songs, klezmer music, jazz and, late at night, the tangos his father played at home to alleviate his homesickness. Piazzolla hated tango, but when his father bought him a bandoneón, the button squeezebox that is the quintessential instrument of tango, he set out to learn it “just to please him,” he once said. There were no bandoneón teachers around, so he learned the instrument playing transcriptions of Bach, Schuman and Mozart. He was 13 when he met the iconic tango singer Carlos Gardel, in town to shoot a couple of movies for Paramount. After hearing him play, Gardel famously told him “Mirá pibe, el fuelle lo tocás bárbaro, pero al tango lo tocás como un gallego” (Look kid, the squeezebox you play great, but tango you play it like a gringo).

Piazzolla was still very much a gringo when the family returned to Argentina in 1937, three years later. Even his Spanish was not that good. While in Mar del Plata, he took bandoneon lessons and also heard violinist Elvino Vardaro’s sextet on the radio. His modernist approach awakened in him a new interest in tango. In 1939, he left Mar del Plata to try his luck in Buenos Aires. He joined the orchestra of the great bandoneonist and composer Anibal Troilo, and after a four-year apprenticeship, he left to form his own orchestra. But his goal never was playing tango for dancers in cabarets. He studied with composer Alberto Ginastera, wrote music for film and won a classical music competition that led to studies with Nadia Boulanger in Paris in 1954. Whatever musical technique she taught him, her most profound impact was her blessing of his tango. He didn’t have to be a classical musician to write serious music, he could be Piazzolla.  So, at his return to Buenos Aires in 1955, he formed his Octet, which marked a before and after in tango history.

Still, three years later, unhappy with the audience response to his music, Piazzolla was back in New York, where he would stay until 1960. During that time, he not only wrote new music and worked as an arranger for hire, but formed, and recorded with, an ensemble he called the J-T Quintet, or Jazz Tango Quintet, which included electric guitar and vibraphone. It was an extraordinary time in music. In jazz, Miles Davis released Kind of Blue; Ornette Coleman, who played a now legendary two- week residency at The Five Spot club in Manhattan, released The Shape of Jazz to Come; and Charles Mingus his epochal Ah Um. But the death of his father in 1959, which inspired his moving “Adios Nonino,” and his lack of success, nudged Piazzolla back to Buenos Aires.

Of all that, and more, Piazzolla constructed a distinct musical universe that has its roots in tango but, at different times, might draw from European classical music and jazz, to klezmer and rock. The musician who once pined to be a “serious” composer, found his place in the classical repertoire and the great concert halls with his New Tango.

His music is all written out, but open to broad interpretation, at times suggesting the freedom of improvisation in jazz. He eschewed conventional tango orchestras and groups and, perhaps drawing from his experiences in New York and with jazz, settled on the quintet as his best instrument: rich in sonorities, flexible and compact. And once he found his musicians, he wrote specifically to their talents and personalities — not unlike what Duke Ellington did with the great soloists in his orchestra.

Not surprisingly then, Piazzolla’s music sounds at once vaguely familiar yet profoundly different. It also sounds deceptively simple to play. Instrumental brilliance is a minimal requirement — but just one aspect of it. The late pianist and composer Gerardo Gandini, a member of Piazzolla’s final group, once seemed to warn performers away in the starkest terms: “La música de Piazzolla es Piazzolla tocándola” (Piazzolla´s music is Piazzolla playing it).

Such are the challenges violinist Tomás Cotik and pianist Tao Lin face when approaching this music. On Legacy, their second album of Piazzolla’s works, they address his history as they put their imprint on the music. It’s an expansive program, set by personal resonances rather than thematic ideas.

“Vardarito” and “Escualo” (Shark) suggest bookends of Piazzolla’s relationship with the violin in his music. The former was dedicated to violinist Elvino Vardaro, so influential in Piazzolla’s rediscovery of tango and, fast forward to the late ’50s, a member of his Octet and his first Quintet. The latter suggests both a tribute and a dare by Piazzolla to Fernando Suárez Paz, his phenomenal last violinist, who as it turns out, as a youngster, had subbed for Vardaro the times when the old master fell ill.

“Balada Para un Loco” (Ballad For A Madman), with lyrics by Uruguayan poet Horacio Ferrer, became cause célèbre when was voted second prize at the First Latin American Festival of Song and Dance in 1969. No one remembers the winner, but “Balada …” became a major hit and is now considered a landmark in the evolution of the tango-song — even if Piazzolla seemed not to think much of it. “It’s an audacity to play a song that’s not for us violinists,” says Cotik, tongue in cheek. “But then again, I chose songs I wanted to play, I needed to play.”

“Revirado” (Crazy), written in 1963, nods at the bright sound and fast-pace of the Old Guard tango — while showing a way forward in its harmony and counterpoint.  “Jeanne and Paul” is one of two pieces written by Piazzolla for Bernardo Bertolucci’s film Last Tango in Paris — which by then had already been scored by Argentine saxophonist Gato Barbieri. Both were eventually used in Francesco Rosi’s 1976 thriller Cadaveri Eccelenti.

Piazzolla demanded from his musicians roña (dirt), a certain griminess in their playing.

Music is not about perfection — and certainly not Piazzolla’s music. His is, instead, about profound, imperfect humanity. It’s violent and tender, it pushes and probes but also comforts, and while it can be nakedly emotional, it also seems to mock the melodrama so dear to tango.

Throughout this recording, Tomás Cotik and Tao Lin distill the sound of the various Piazzolla ensembles into mostly duets and trios. They often attack the music on the page as if demanding that it gives up its secrets, pushing hard at fast tempos, feelings exposed on a knife’s edge, no chance for sentimentality. It is how a celebration of Piazzolla’s legacy must sound.

“Lefty,” the small, lame, immigrant kid, who fought his way to respect on the tough streets of the Lower East Side, would’ve appreciated it.