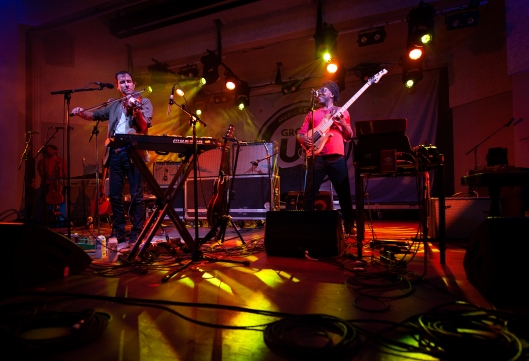 Andrew Bird (left) and Richard Bona at the Ground Up Music Festival in Miami Beach, Friday. The set was promoted as the festival version of Bird’s “Live From the Great Room.” In case you wonder how loose things were, as they talked on stage to figure out what to play next, Bird said to Bona “I know little about you except that you’re a badass.” Mr. Bird, Mr. Bona; Mr. Bona, Mr. Bird. And yes, it worked out fine.
Photo courtesy Luis Olazabal /The Rhythm Foundation ©.

The Ground Up Music Festival at the North Beach Bandshell in Miami Beach opened yesterday with a Chamber-of-Commerce-wish-list combination of strong performances,  good vibes, and 70-degree weather with a slight breeze from the ocean.
That’s one way to spend a Friday evening hanging out outdoors in February.

Now in its third edition, the festival, created by Ground Up Music, Snarky Puppy’s artist-managed label, is set up not as your standard-fare music festival, but rather like a three-day, low-key communal experience for both, artists — who stay the weekend and can be seen milling around, listening to, and sitting-in with, fellow performers — and music lovers.

The festival area includes two performing spaces, the bandshell and a satellite stage in the adjacent park; a Senior Center building that houses masterclasses and talks; booths selling anything from food and beverages to clothing and stones, and for the weary, hammocks set up between the palm trees.

It might sound like a simple concept, but in these days of virtual and digitally mediated experiences, having access to the artists and sharing actual, in-person performances with like-minded music lovers in a pleasant setting has struck a nerve.
This is not a cheap ticket (at least for South Florida standards), and according to Paul Lehr, Ground Up Music’s CEO, followers of the band around the world have accounted for much of the festival’s early success. “In the last two years, about 60 percent of the audience [came] from 40 states and 40 countries all around the world,” he said in a conversation last month. We’ll have to wait for the final tally, but yesterday’s near capacity attendance suggested the festival might be finding an audience well beyond the band’s fans — and it should. (It’s worth noting that only 1,800 tickets are sold per day).

More early highlights at the Ground Up Music Festival 2019 : 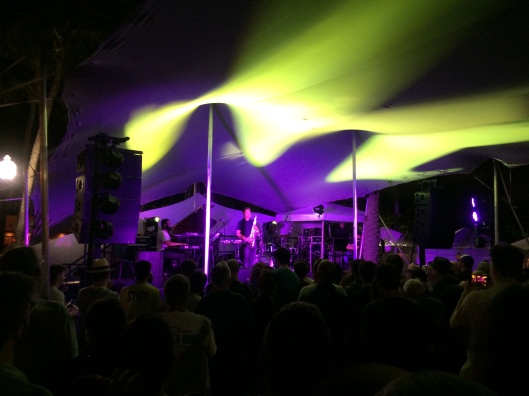 This is a lean, muscular trio, that plays with a seemingly uncompromising hard edge. Yet because of how the pieces are constructed, and how the players listen to each other and interact, the music, while not set up in standard song formats, flows, tells stories and ultimately engages. Here, instrumental brilliance has a musical purpose. Lalah Hathaway closed the day with a set of timeless R&B, no-frills elegant, quietly soulful, and smooth. This was one of those performances in which you just lean back and let it all sweep over you, just like a mild breeze coming in from the ocean in February.

The Ground Up Music Festival continues today with sets by Bokante, Bill Laurance, Andrew Bird, and Snarky Puppy, who as hosts, perform every day.
For full schedule check here.