Gracious hosts to the end, Snarky Puppy closed the third annual Ground Up Music Festival at the North Beach Bandshell in Miami Beach yesterday with a killer set that seemed to sum up the weekend’s musical experience: superb musicianship, unexpected collaborations (trumpeter Nicholas Payton and the Gnawa music group Innov Gnawa)  and moments of brilliance, all wrapped in an unassuming-but-still-kick-ass presentation.

Ground Up Music, Snarky Puppy’s label, created and produced the festival, and the band played a set every day while several of its members also appeared with other artists (unless proven differently, I believe there is more than one Michael League) or leading personal projects throughout the weekend.

Sunday, Snarky Puppy took the opportunity to, again, present music from their upcoming album Immigrance. If Saturday’s performance suggested they might be taking a simpler musical tack, that was laid to rest in Sunday’ set, as the writing and the playing showed a band that continues to probe and push.

There were (again) what sounded like echoes of electric Herbie Hancock circa 1974; but also the punchiest, daredevil horn and brass arrangements this side of early Irakere; superb soloing, a hint of disco and, for a band fond of flexings its muscles, moments of almost romantic, cinematic music style storytelling. The performance by David Crosby and the Lighthouse Band (Becca Stevens, Michelle Willis, and Snarky Puppy’s Michael League) was one of the highlights of the weekend.

Crosby,77, who not only sounded astonishingly good but seemed in a feisty good mood, collaborated with Stevens, Willis, and League on his 2016, Lighthouse and again on, last year’s Here If You Listen. The quartet also toured last year. (Crosby also appeared at the first edition of Ground Up Music Festival, in 2017)

From Crosby and this group, one would expect exquisite vocal arrangements and perhaps guitar latticework. Also, considering Crosby’s remarkable career, a glance back to an old hit or two would never be a bad idea — and Sunday we got “Guinnevere,” and a terrific, dark version of Joni Mitchell’s “Woodstock.” (The refrain “And we’ve got to get ourselves/ Back to the garden,” insistently repeated, sounded like both, a plea and a command)

What not many in the audience were perhaps expecting was a fiery, hair-raising version of Neil Young’s “Ohio,” a song written in reaction to the Kent State shootings on May 4, 1970, and performed by Crosby, Stills, Nash & Young.

“This song has to be sung by many people,” said Crosby introducing the song. “And it has to be sung fucking loud,” he demanded with an edge, as if he wanted it to be heard in Washington, D.C. 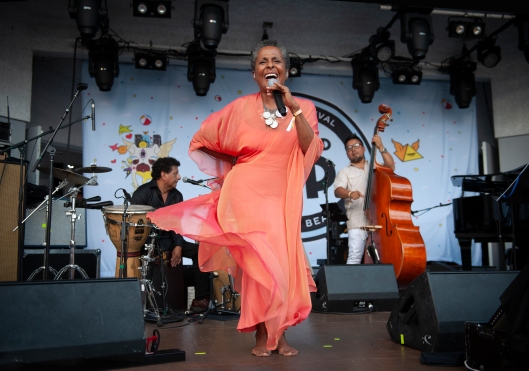 Peruvian singer Susana Baca can be a mesmerizing performer. A champion of Afro-Peruvian culture, she’s an expressive, if not powerful, vocalist, and there’s an elegance and grace to her singing and movements on stage that draws you in.

Unfortunately, her set Sunday was marred by problems with intonation (perhaps caused by sound problems); a poor mix of her backing group, and odd choices of material, especially the opening numbers, which sounded more appropriate for an evening show in a small, intimate room than for an outdoor venue on a mid-afternoon slot. Whatever the reasons, the set never quite got on firm ground. There were glimpses here and there of Baca’s talent and the subtle power of Afro-Peruvian music, but glimpses were all we got. There is so much more to her and her music.

The Ground Up Music Festival 2020 will take place at the North Beach Bandshell February 14-16. Write down the dates and just plan to be here. That’s all there is to it.