Drummer Dafnis Prieto and pianist Omar Sosa closed this year’s Global Cuba Fest at the Light Box in Wynwood, Miami, with shows on Friday and Saturday, respectively, that suggested a sort of musical yin and yang. For an annual festival that celebrates the music of Cuba and its diaspora, the weekend was a perfectly tuned statement — artistically ambitious, global in its vision and brilliantly executed.

As a composer, Prieto constructs unusual narratives, carefully deploying his instrumental colors and smartly balancing structure and improvisation. But what set Friday’s performance apart was his playing, a polyrhythmic sound storm, pushing the music, and framing and shading the soloing. There is more engineering than emotion in Prieto’s music; but what engineering it is.

Even his brief solo interlude, in which he played claves as he vocalized different rhythmic patterns, was a marvel of design, both minimal and rich.

That was also a welcome respite. If there might be an objection to the sextet’s performance Friday, is that, while there were smart change-of-pace moments such as Apfelbaum’s melodica feature, the music would’ve benefited from more open spaces and greater dynamics. This was a no-nonsense, all-out effort with stunning moments. But if it’s relentless, in time, even brilliance brings diminishing returns. 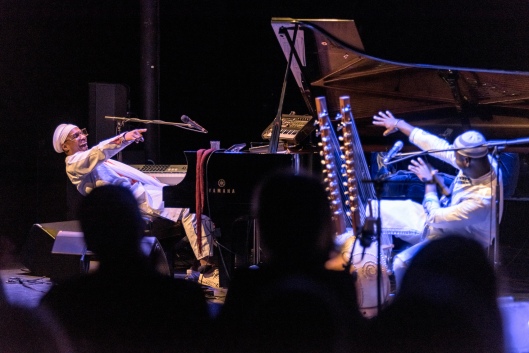 Whatever the setting in which he’s appearing, whatever the group he’s performing with, Sosa begins his concerts like a ceremony — and goes from there. The gesture sets a tone, suggesting that the music will be about sound and mysteries, not technical displays. He’s not there to impress you. He’s a celebrant, calling on the spirits and if you are patient, and luck is with us, you might get to hear something special.

On Saturday, the concert quickly became an extraordinary experience — wordless storytelling, subtly arranged and delicately shaded one moment; a neighborhood party the next, the audience singing and clapping along.

This trio reached Miami in the middle of a long tour, so by now, the musical three-way conversations between Sosa, Keita and Ovalles sounded not only substantial and elegantly constructed (it was often hard to tell what was written out and what was wholly improvised), but also fluid and fun. Seemingly in every piece, the leading role moved gracefully from player to player and instrument to instrument.

Soon, Sosa & Co. created an immersive experience that spilled out of the stage area, bringing the audience into a place without musical borders, a place in which African grooves could become Cuban montunos, an Argentine chacarera or a Venezuelan merengue.
On Saturday, the spirits did join the proceedings and it was a feast.

Global Cuba Fest was presented by Fundarte and Miami Light Project. It opened the previous weekend with performances by pianist Tony Pérez and multi-instrumentalist singer and composer Yusa.