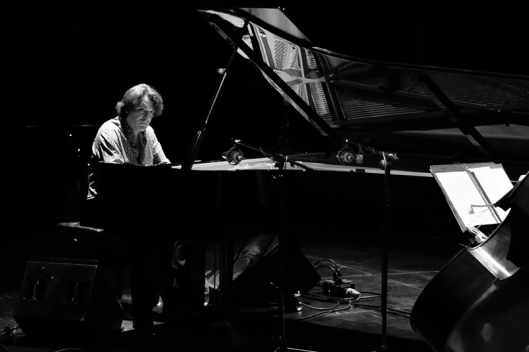 Mention flamenco and the immediate associations are with dancing, singing, and the guitar. The piano has a rather tentative history in flamenco. While some scholars include the instrument in proto-flamenco history going back to the 19th century, the piano emerged in flamenco with figures such as Arturo Pavón and Pepe Romero beginning in the late 1940s, often attempting to translate the language and role of the guitar.

Fast forward to today and not only is there a substantial list of talented flamenco pianists, but the piano is creating its own vocabulary in flamenco.

One of the leading figures in contemporary flamenco piano is David Peña Dorantes, simply known as Dorantes, who will be appearing as part of Flamenco Rave, presented by FUNDarte, with virtuoso guitarist Daniel Casares and the singing and guitar duos Naike y Paquete (Naike Ponce and Juan José Suarez “Paquete”) and Rosalia & Raúl Refree, Sunday at the Miami-Dade County Auditorium.

Born in Sevilla in 1969, Dorantes is part of an illustrious flamenco family (including his grandmother, María “La Perrata;” his father Pedro Peña; and his uncle, the late, great singer Juan Peña “El Lebrijano”) and started in flamenco playing guitar before falling in love with the piano. He graduated from the Royal Conservatory of Music in Sevilla and debuted as a pianist in 1991. Since he has recorded four albums, his most recent titled El Tiempo Por Testigo (Time As A Witness) and on Sunday, he will be appearing with Javi Ruibal, percussion.

Dorantes spoke from Sevilla, about his love of the piano, the guitar and how tradition evolves, and his unexpected influences. The conversation was in Spanish.

What made you change from the guitar to the piano? How was that process?

Dorantes: I was born in a family, the Peña family, with strong flamenco roots […] but in my parents’ house there was no chance of having a piano. The guitar was always what was closer so that’s what I started studying when I was five. But then my grandmother bought a piano and I remember going to her place and putting my hands on the keys and I just fell in love with it. I heard that sound and I knew that was going to be my future.

But there was no piano at home so I kept studying guitar. Then when I went to the conservatory I got a degree in classical piano, but of course what interested me was flamenco.

[However] there was no place for me to learn flamenco piano, so while I was studying at the conservatory I was trying to develop how to bring the piano to flamenco on my own.

So the work is actually to create a vocabulary for piano in flamenco?

And that is what is beautiful about this challenge: we are at the beginning of the story. It’s true that Arturo [Pavón] used to imitate the guitar accompanying el cante (the singing] with Manolo Caracol and he was very tasteful. And there was also Pepe Romero who imitated the guitar. They were looking for a different concept for the piano. But I was always clear from the beginning that I didn’t want to imitate the guitar on the piano. It didn’t make any sense to me. It’s a different instrument with a different sound and different possibilities. The piano must have its own identity in flamenco.

Flamenco has a tremendous plasticity and is capable of integrating other genres and instruments very organically. How has the piano been accepted by traditionalists?

It’s a curious thing. My father is a guitarist and he used to tell me how, when the guitar was starting in flamenco, in the small villages where the old gypsies lived and sang, they didn’t like it. At the parties, they would sing al nudillo (to their knuckles) keeping time [hitting] on the tables. So when my father would show up and tried to accompany, adding some harmonies, the old guys would shush him. “Be quiet child, and take that instrument away that you are bothering us with.” So even the guitar had its period of acclimation in flamenco, and today the guitar is a flamenco instrument true and true.

Funny to be reminded that what is now The Tradition, was one day someone´s new idea.

I go to a village to visit my elders, walk into a party, hear the old people sing and I understand how for them, sometimes the guitar is a bother. They just want the cante  and the palmas. (hand clapping) There is no right or wrong, it’s just another way of seeing flamenco — and a very interesting one, I have to say.

How much improvisation is there in flamenco and in your music?

The improvisation I do, the improvisation we do in flamenco and I’m most comfortable with, is that in which I start from nothing. It’s composing on the spot. And that [approach] comes from the guitarist accompanying the singer, following as the singer as he changes tonality, improvising between verses. In my concerts, I have my composed parts, my established pieces, but 50 percent is improvisation and I don’t know what I’m going to be doing. I start with my prepared music, but the rest happens at the moment.

Given your classical formation and your interest in jazz, who or what do you consider your main influences?

Ah, it’s a bit of everything. I do have my classical formation and I’ve written in the classical style — but it’s not as strong in me as flamenco.I love Stravinsky, Bela Bartok, Elliot Carter, Arvo Part, but I’ve also listened to Chick Corea, Gonzalo Rubalcaba, Chucho Valdés, Herbie Hancock .…What really moves me is the curiosity of learning new, different things. One has to allow being influenced without fear so the creativity can come out without complexes.

A version of this piece was posted on Artburst Miami, March 2018.