Rough-edged but cosmopolitan; by turns poetic, cerebral, and flashing the attitude of a brawler; Piazzolla’s New Tango reflects not only an exceptional talent but his unusual personal story and his place in music.

From birth, Piazzolla was an outsider in the tango world.

He was born on March 11, 1921, in Mar del Plata, a seaside city about 248 miles south of Buenos Aires, Argentina’s capital, and grew up in New York City, where the family emigrated when he was four years old. Born with a right club foot, by the time he was three he had undergone several painful operations. For the rest of his life, his right leg was shorter and thinner. Despite being a small kid who walked with a limp and wore special shoes, perhaps because of it, Piazzolla was active in sports and earned the respect of the kid’s gangs in his neighborhood as a fighter who never backed down.

Musically, he grew up listening to the tangos his father, Vicente “Nonino” Piazzolla, played every night after work, his home remedy to homesickness. (Piazzolla once said he didn’t like tango as a kid because it made his father cry.) But there was also jazz, and the music of his diverse neighborhood, including Italian songs, Klezmer and Bach, pouring out of a window, his music played by a neighbor, a Hungarian classical pianist who would become Piazzolla’s first influential teacher.

He got his first bandoneón when he was eight, a birthday gift from his father and, just to please him, Piazzolla tried the buttons to get some sounds. The bandoneón is a melancholy-sounding, button squeezebox invented in Germany in the late 19th century as an inexpensive alternative to organs and harmoniums for country churches. It found a new life, and different company, when it was adopted by tango musicians working in the dance halls and whorehouses of Buenos Aires. It is a devilishly difficult instrument.

Piazzolla learned the basics of the bandoneón with the teachers available in New York at the time, but developed his technique by adapting some of the works by Bach, Chopin, and Mozart he studied at his piano lessons. He also played folk music and tango. Improbably, he got to meet, and informally accompany, tango’s superstar, singer Carlos Gardel who was in New York to shoot movies for Paramount and perform.

Piazzolla was 16 when he returned to Argentina and a prodigy on the bandoneón. After two years in Mar del Plata, he decided to try his luck in Buenos Aires and soon he was playing in, and arranging for the orchestra of the great bandoneón player and composer Anibal Troilo. It was a first-class tango apprenticeship —but not enough musically. Soon he was also studying with Argentine classical composer Alberto Ginastera, composing in the European classical style, and writing music for film. Then he abandoned tango altogether. Improbably, his studies in Paris with the fabled Nadia Boulanger, teacher of Aaron Copland and Darius Milhaud, among others, but especially her encouragement, led him back to tango.

But it was different, New Tango. It acknowledged the tradition, yes, but it also drew from jazz, used classical forms and techniques, featured Bach-inspired fugue-like passages, and moved with an energy and a rhythmic pulse that evoked Bartok, Stravinsky, and Klezmer music. This wasn’t tango for dancing. This was listening music. Take it or leave it. Piazzolla’s attitude, probably as much as his music, infuriated many tango traditionalists.

In 1960, after a frustrating experience with his brilliant Octeto, which he disbanded for lack of work, and a short, failed return to New York, Piazzolla was back in Buenos Aires and built the instrument for his music: the Quintet.

A common grouping in jazz, a quintet was unusual in tango. Moreover, this Quinteto featured bandoneón, violin, piano, double bass, and electric guitar, a particular irritant to tango traditionalists. A brilliant arranger, Piazzolla wrote for the Quinteto as if for an orchestra, but leaving room for the interpretation and vigor, if not the improvisational latitude, of a jazz band. This first Quinteto would stay together, with some changes in personnel, until 1971. Such continuity allowed Piazzolla to write for musicians not instruments, echoes of Duke Ellington, and set the canon of his New Tango.

In 1978, after a successful experience in Europe, Piazzolla returned to Buenos Aires and what had been his most productive ensemble format. For the next decade Piazzolla would perform and record with the New Tango Quintet and achieve an even broader international recognition.

But in 1988, his health failing, Piazzolla dissolved the Quintet.

He underwent quadruple bypass surgery, and after a brief experience with a sextet he decided he would focus on appearing as a featured artist with symphonic orchestras.

On August 5, 1990, little over a month after one such performance, he suffered a brain hemorrhage while at his home in Paris. Taken back to Buenos Aires, he lingered for nearly two years before dying on July 4, 1992. He was 71 years old.

The Quinteto Astor Piazzolla appearing at the Arsht Center was created in 1998, a request of Laura Escalada Piazzolla, the composer’s widow and president of The Astor Piazzolla Foundation, to flutist and composer Julian Vat. 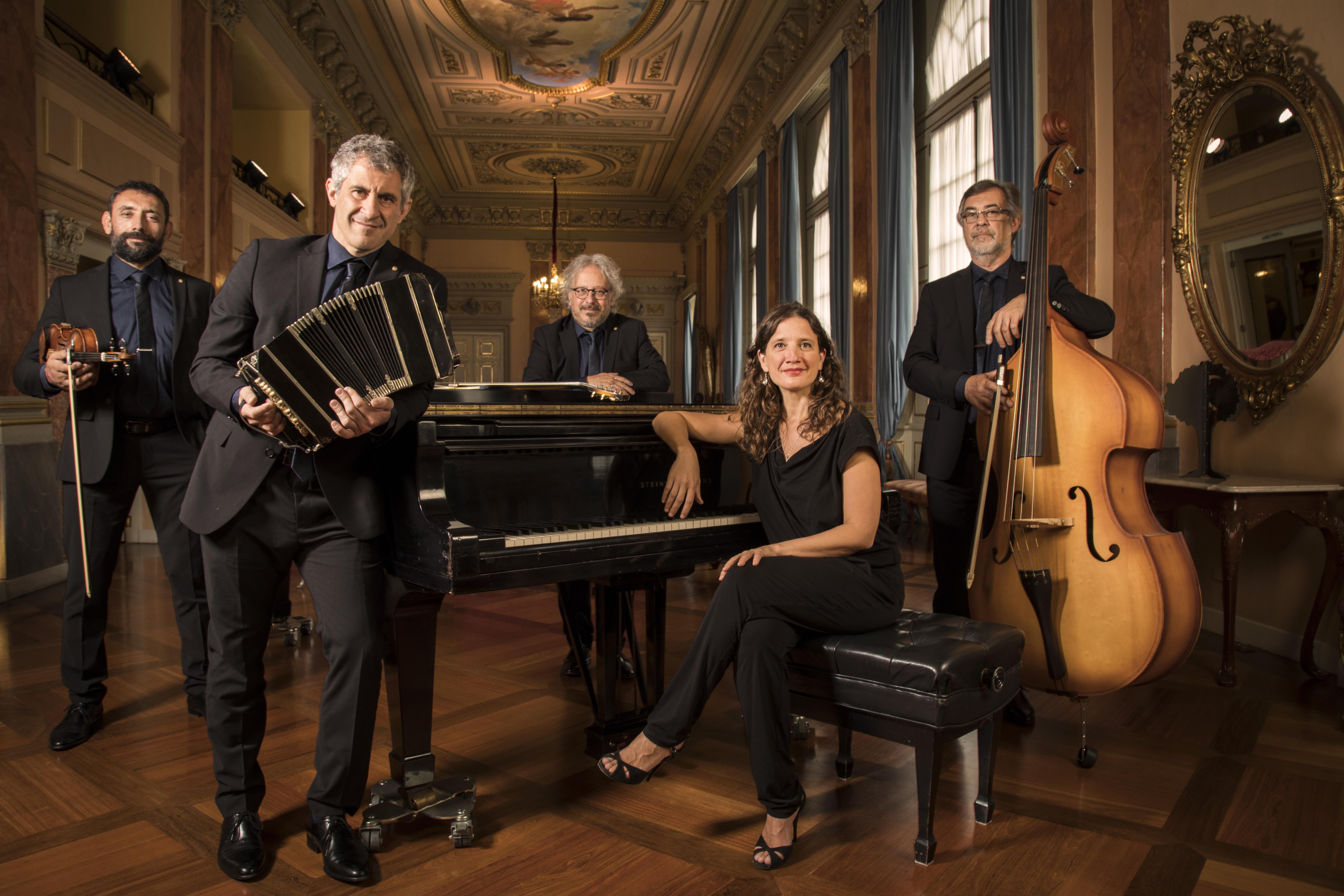 “We have the great advantage of being able to study and analyze not only what Piazzolla wrote, but how the musicians who Piazzolla chose to play his music interpreted it, and then arrive at our own reinterpretations. If the work had been to reproduce what was already done, it would be something technically praiseworthy, but artistically reproachable,” says Vat, the quintet’s musical director. “We aim at respecting the feeling and the essence of Piazzolla’s music. Piazzolla always took risks and if there is no risk in his music, we would be betraying him.”

An edited version of this story appeared in the Fall edition of the Arsht Magazine. Sept,2021