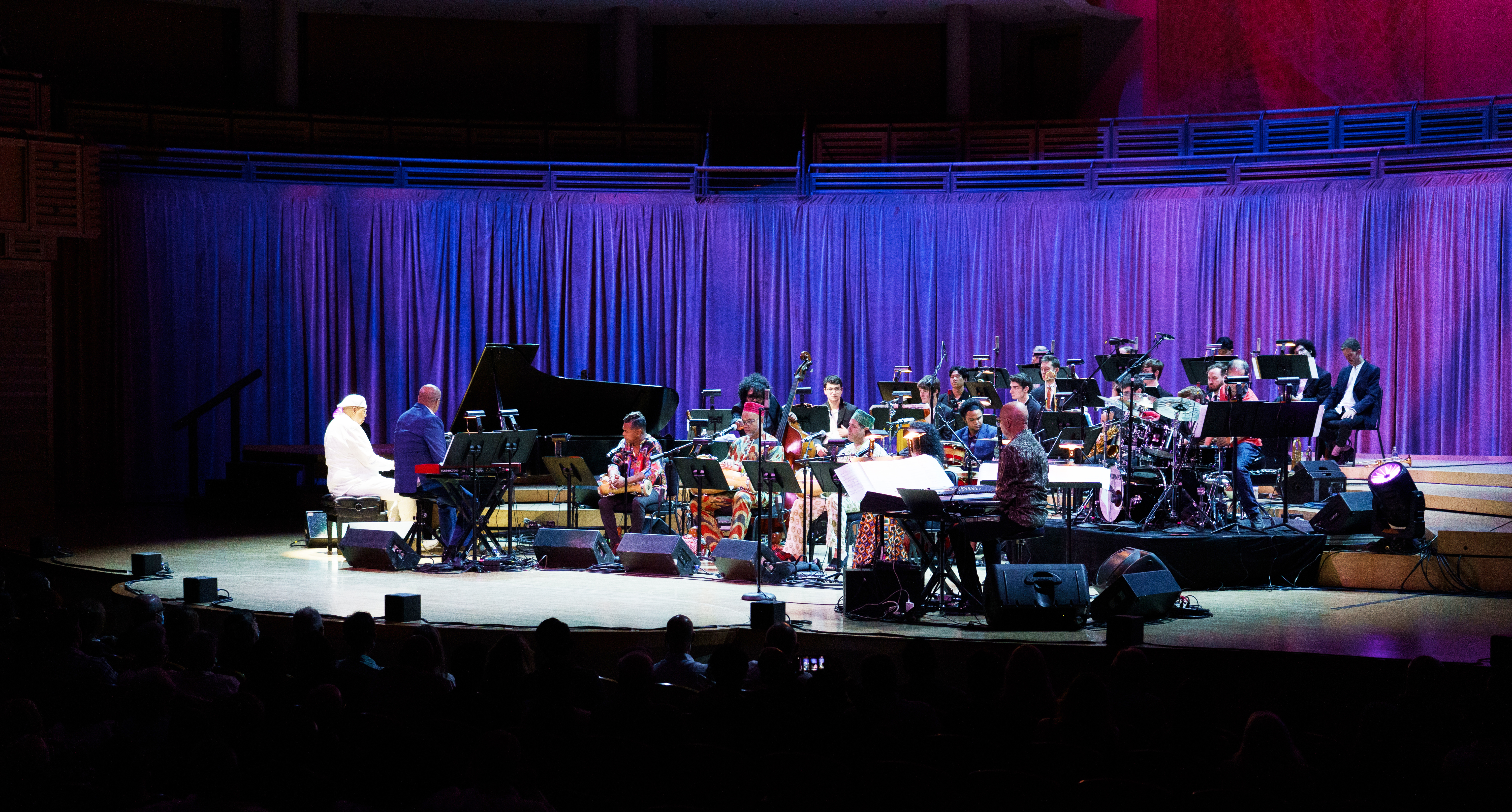 Maestro Chucho Valdés is not given to hype. So, when in the days leading to the premiere of his three-movement suite La Creación last night at the Arsht Center, in Miami, said that this was “the most important work of my entire career. So far,” your ears have to perk up. The piece was a commission by the Adrienne Arsht Center for the Performing Arts of Miami-Dade County.

Time will tell about the place of this work in what is already a rich catalog. This was an ambitious idea fraught with risks: tell a complex story (see program notes below) in music through a blend of jazz and secular and religious Afro-Cuban musical traditions, and modern and ancient instruments. Valdés, with notable assists by Durán and Beasley, made it flow logically and purposefully, balancing raw power and grace.

For Valdés, who just celebrated his 80th birthday, La Creación suggests a summation of six decades of work.

It will be fascinating to hear how La Creación evolves after repeated performances.

His “So far” sounded last night like a fair warning.

La Creación (The Creation) is a three-movement suite for small ensemble, voices, and big band that tells the story of the creation according to La Regla de Ocha, the Afro-Cuban religion commonly known as Santería.

“I started exploring my African roots a long, long, long time ago,” says Valdés during a conversation, held in Spanish, at his home in South Florida. “In Santa Amalia, where we lived, the house across the street from my house, there was a santero [a Santería practitioner], and often they were beating drums and singing for Santo.”

Outsiders were not welcome, Valdés recalls, but he found a space in the house’s basement where he could hide and listen. “There was garbage. It was a mess, but I didn’t care. When I started listening to those songs …” he says, his voice trailing off.

“I was just a kid, and at the time, I was studying Mozart, Beethoven, and Chopin at the conservatory,” he says with a hearty laugh. “But this was different. It felt different. I felt it in my bones. From then on, I tried to listen and educate myself on my own. For my music, I took from the two main lines in my education: the classical conservatory and Bebo’s popular music. But I’ve been always fascinated by [Santería´s] music.”

La Regla de Ocha, also known as Lucumí, is a syncretic religion developed in Afro-Cuban communities in the 19th century. It blends West African beliefs — mainly from the Yoruban people from what is now Nigeria, Benin and Togo, and then the largest enslaved group in Cuba — with elements of the Roman Catholic faith and Spiritism. With its rich pantheon of deities, or orishas, Santería evokes Greek mythology. Like the ancient Greek deities, each orisha has extraordinary powers for good, but also less-than-godly traits such as anger, envy, and jealousy. In part as protection from their Catholic owners, the African slaves cloaked the orishas as Catholic santos — hence the name Santería. As a result, each orisha has a corresponding saint with corresponding qualities or powers: Babalú Ayé and St. Lazarus (healing), Oshún and Our Lady of Charity (love) and Obatálá and Our Lady of Mercy (spirituality, father of creation)

In time, Valdés began to incorporate rhythms, chants, and instruments from Santerían ritual music in his compositions, most notably in the audacious “Misa Negra [Black Mass],” but also in pieces such as “Bacalao Con Pan,” Irakere’s breakthrough hit; the stirring “Juana 1600” and “Aguanile Bonkó.” Still, from early on, Valdés seemed to make a point of including fusions of Afro-Cuban music with jazz and rock in every Irakere recording and in his own solo projects and small groups, with works such as “Concierto Yoruba,” and “Religion of the Congo.”

“The ‘Black Mass’ has been significant for me because it was an early statement in my search of my and my culture’s African roots, but that search has continued,” Valdés notes. “La Creación is about the wider, deeper roots, about where this story comes from. It’s the story of Olodumare, the supreme creator in the Yoruba religion. He creates man, nature, the universe, everything. So I wanted to tell this story in music. Who is Olodumare? How is this religion born? How does it develop? How does his creation reach the Caribbean, America?”

For the world premiere performance of La Creación at the Arsht Center, Valdés returned to the beginning of his career and to work with a large ensemble. He organized the 10-piece Yoruban Orchestra, an exceptional group including old and new collaborators, anchored by drummer and MacArthur “genius” fellow Dafnis Prieto and bass player Jose Gola. For this performance, the Orchestra is augmented by musicians from the University of Miami Frost School of Music Henry Mancini Institute Big Band.

For help with the arranging, orchestration, performance, and conducting, Valdés turned to two pianists, composers, and arrangers he greatly admires: Hilario Durán and John Beasley.

Havana-born Durán is an old friend and collaborator of Valdés, who handpicked Durán as his replacement when he left the fabled All-Star Orquesta Cubana de Música Moderna to form Irakere. “I trust Hilario completely, as a player and as orchestrator,” Valdés says. “And he knows my style perfectly.” Durán worked on the first and third movements of La Creación.

“The first movement starts with the drums, and it’s about Olodumare, how everything was created and developed. It begins with the toques, the ritual songs,” Valdés says. “It features the big band, but there are parts in which we also sing to some orishas that I´m sure will suggest a Yoruba piano concerto. But it’s not folklore, and it´s not just ritual music. It’s about now, the 21st century, and has very contemporary touches in it. And it has elements of jazz, because jazz and its African roots have a lot to do with this, as well.”

Multi-Grammy and Emmy Award-nominated John Beasley is perhaps best known to jazz fans as the leader of the 15-piece band MONK’estra. His role is most prominent in the second movement of La Creación. “It’s about the blues, and you’ll hear, like, an homage to Miles [Davis], but with the batá and a vocalist singing in Yoruba with the big band. So, we pass through the ‘American’ experience, and that leads to a ballad dedicated to Ochún, La Caridad del Cobre, the patron saint of Cuba, and you feel Africa,” says Valdés.

The third movement “takes us back to the Caribbean for the grand finale with the full band,” Valdés explains. “The jazz drum is also part of it. As a percussion instrument, it was born in the United States, but the rhythms are African and are integrated into the grand finale.

“This new work represents the accumulation of all my experiences, everything I’ve learned and my experiments,” says Valdés, who just celebrated his 80th birthday. “This is a moment of full maturity, personally and musically, and now I feel prepared to do this work.”

“This is the most important work of my entire career. So far.”